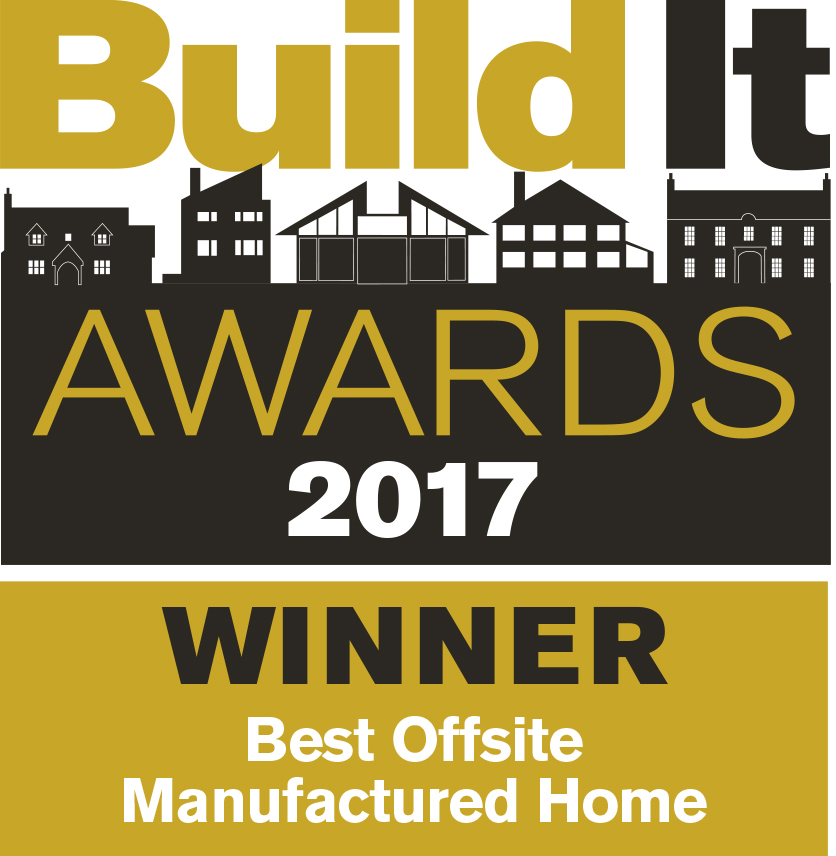 This Meisterstueck-Haus is the winner of the build it Award 2017.

It was voted "Best Offsite Manufactured Home 2017" by the judges:

"The judges were really impressed with the speed, accuracy and value-for-money achieved on this bespoke scheme. The shell of this home was completed in just two weeks, including all the external finishes, windows and doors – allowing the self-builders to get straight on with the internal fit-out."

The results are in!  On 30th June, the “German Dream Home Prize” was awarded for the sixth time.

And we are extremely proud to announce that Meisterstueck-HAUS has won the second prize in the category “Country Houses” with our “House in Kent”, which was awarded 25.5% of the votes (the winner got 26%.....)

“ We are delighted at the positive response from the readers, especially since all the leading residential housebuilders in Germany took part in the competition,” says Markus Baukmeier, MD of Meisterstueck-HAUS in Hamlin. “ We would like to thank all the members of our team who worked so hard on this project, and especially the houseowner for putting his trust in us  - and of course, all those who voted for this outstanding house”.

A record number of 56 housebuilding companies entered over 130 designs for this hotly-contested prize, which is run by Europe’s largest property magazine Bellevue, and Wohnglueck, the customer magazine of the Schwaebisch Hall building society .

Patron of the award is the Association of German Off-Site Manufacturers, the BDF. The 133 entries were assessed and rated by a jury of experts; five houses were shortlisted for each of the seven categories - including the Meisterstueck-HAUS “House in Kent.”

Readers and subscribers voted from 1st February 2017 for their dream home, and won valuable prizes.  A total of 60,000 votes were registered. 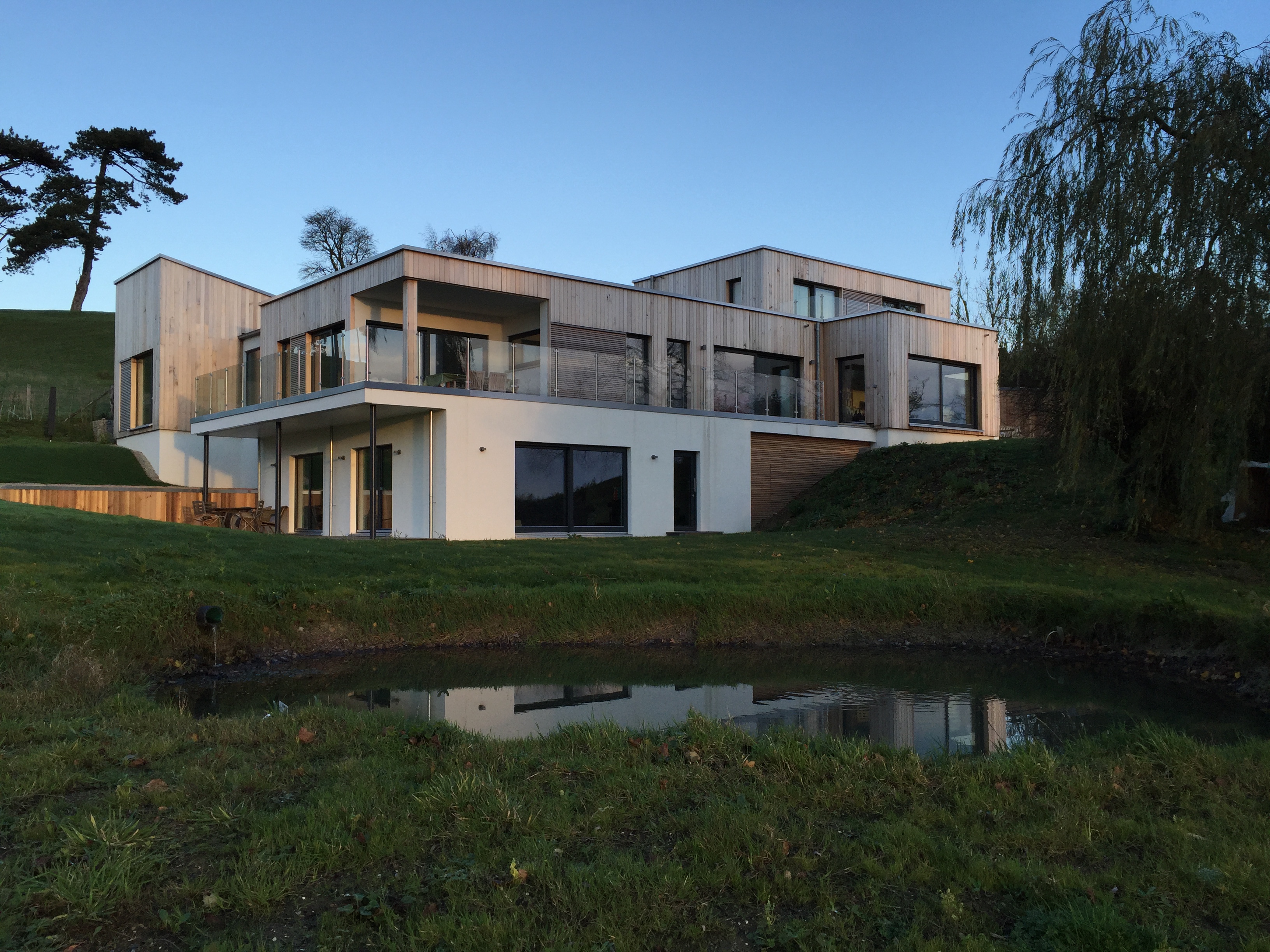 Meisterstueck-Haus has received numerous awards over the years, for instance the German Off-Site Manufacturers “Golden Cube”, and has been in the top 10 in several magazine readers’ surveys. 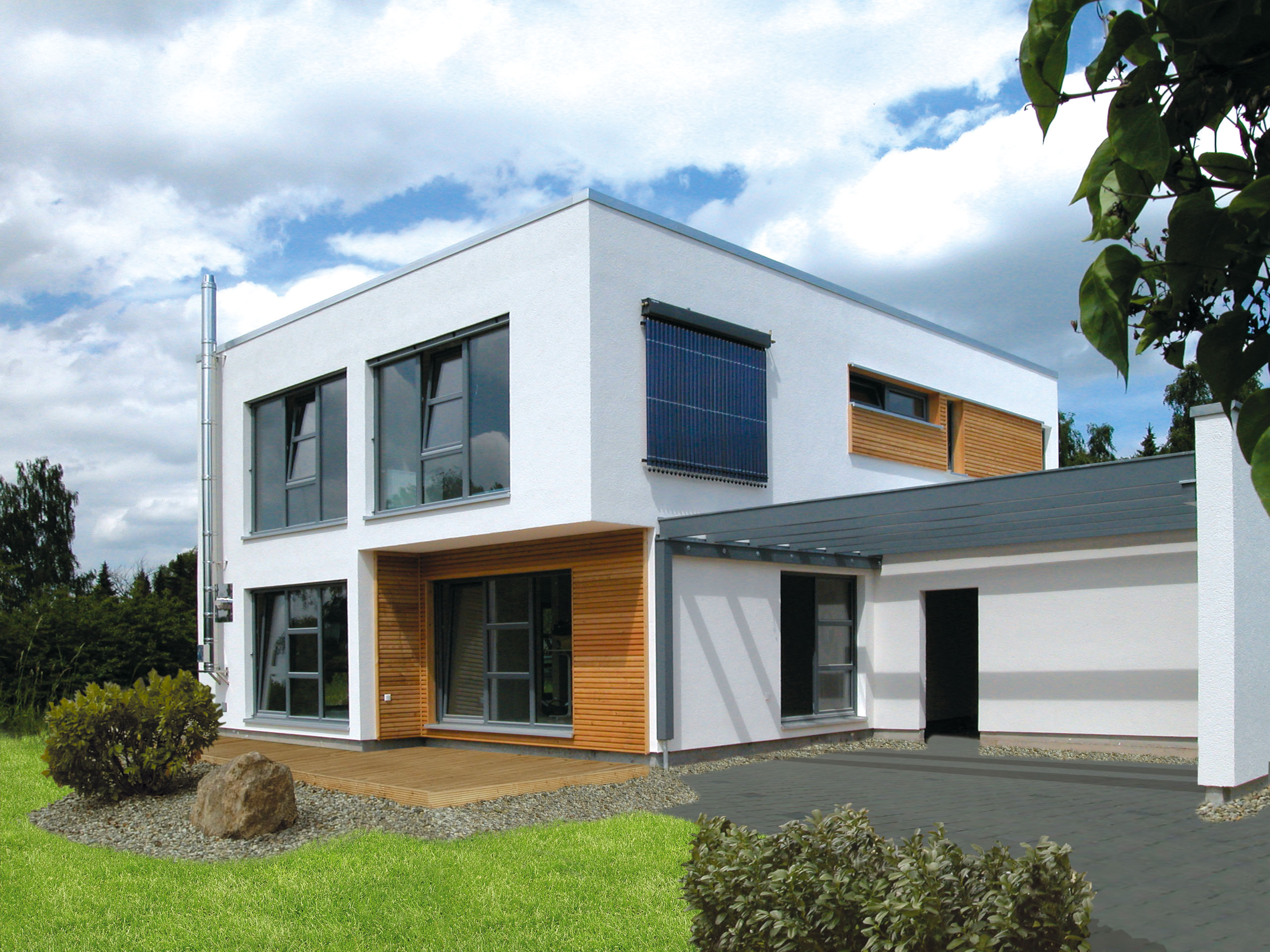 Meisterstueck-HAUS was one of four companies nominated for the German Off-Site Manufacturers Award; against stiff competition, the Hamlin family-owned company was recognised as one of the top four off-site manufacturers in Germany.

The prize-winning "Bauhaus-style" Meisterstueck-HAUS was designed by the Hamlin-based architect Andre Spiegel, and manufactured as a low-energy house with building materials from renewable sources; it is a stunning combination of innovative architectural design and modern manufacturing methods.

"We are extremely proud," says Managing Director Otto Baukmeier."This award recognises our strategy of offering off-site manufactured houses which are designed by architects with no restrictions imposed by construction systems. The future of house-building lies in constructing with natural building materials, and using house technology based on renewable energy."

For instance in 2015, more than 22,000 readers and online subscribers to a leading German self-builder magazine ranked this Meisterstueck-HAUS in the fourth place.

Readers selected this stunning post and beam house Aesthetik 20.11.057 for its clean lines , light-filled rooms and overall sense of spaciousness.

And the competition was tough: the 39 leading off-site house manufacturers in Germany presented their best designs; readers ranked how much they liked each entry from “very much” to “not at all”.

“We are delighted with this result, because it was not decided by a panel of experts, but by readers and self-builders,” says Markus Baukmeier, Managing Director of Meisterstueck-HAUS. 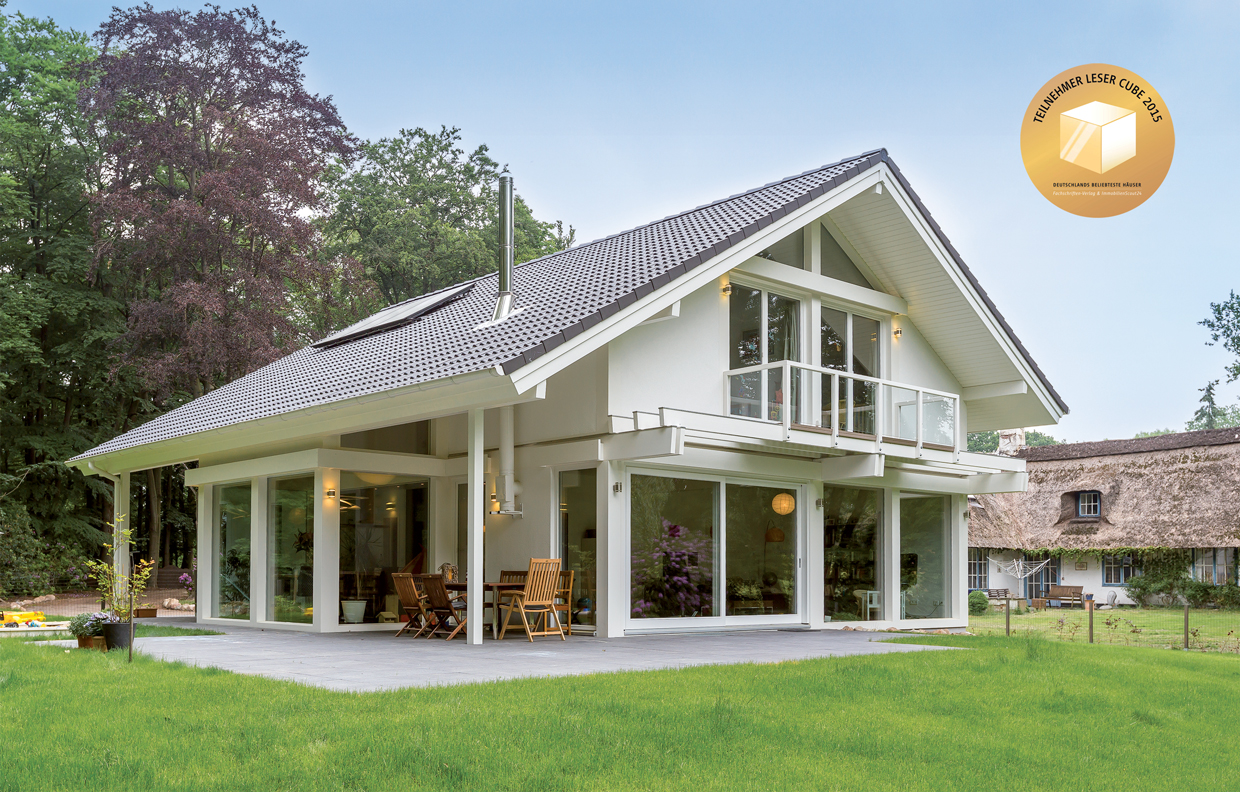 This show home in Bad Vilbel, near Frankfurt, has been the top choice for readers several times.

The Meisterstueck-HAUS design “Kubus” was ranked in second place under the criteria “ Budget Eco-Homes” in a survey of Family Home Magazine readers; 2nd out of 60 entries!

We are of course very proud of this recognition that self-builders love the designs of our Meisterstueck homes. It is important to keep proving that energy-efficient and sustainable construction can also deliver stunning architecture. 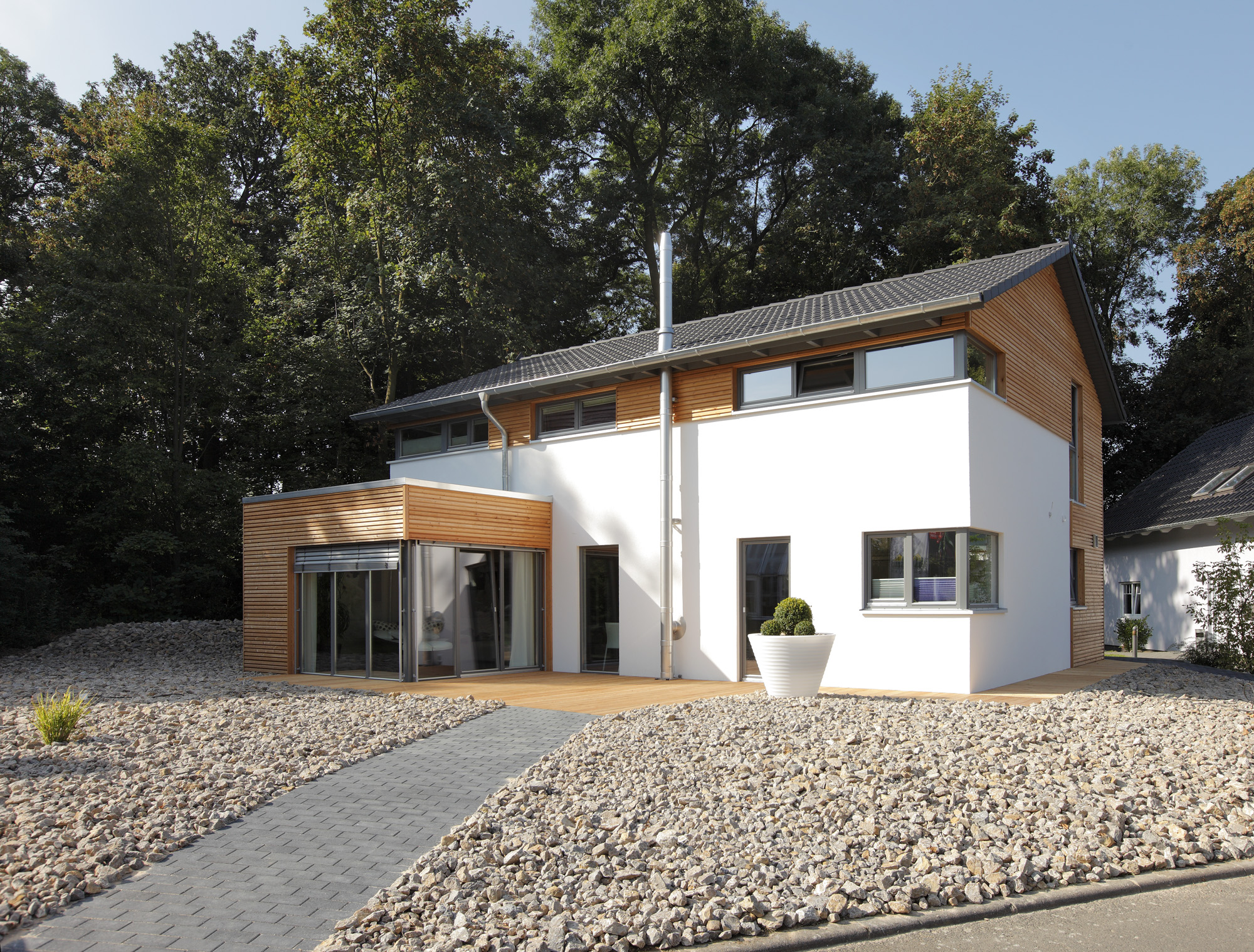 This house can be visited at the Ausstellung Eigenheim und Garten in Bad Vilbel.  You can find details of the house in House Designs. And there is an online video on YouTube.